According Robert Half research, 37% of Australian professionals do not feel they are currently being paid a fair salary. Read more here.

New independent research commissioned by specialised recruiter Robert Half and published in the newly-released 2018 Robert Half Salary Guide has revealed a sizable number of Australian workers feel undercompensated. According to the research, more than one in three (37%) Australian professionals do not feel they are currently being paid a fair salary.

Unsurprisingly, the overwhelming majority of Australian workers (98%) would be willing to accept a job offer with a higher salary if they felt they were not being paid a fair salary by their current employer, with nearly two-thirds (64%) of those saying they would be “very willing”. 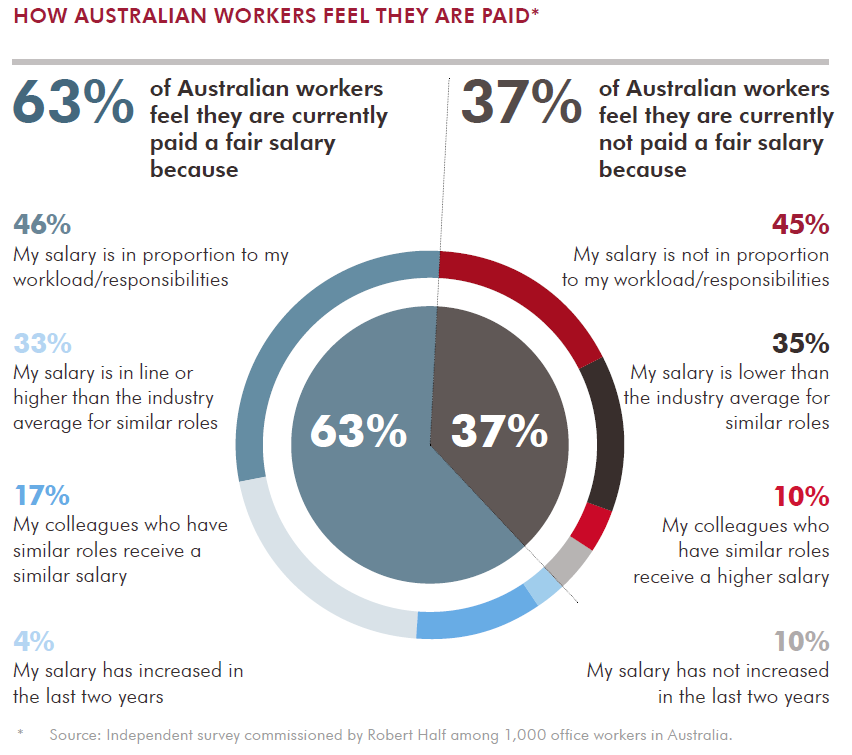 David Jones, Senior Managing Director of Robert Half Asia Pacific said: “One of the main reasons why people change jobs is to secure more pay. Ideally, salaries should increase as responsibilities become broader and more complex, but this isn’t always the case – particularly in an economy marked by slow wage growth.”

“While many employers are rewarding their top performing staff with higher pay, not all employers are either in a position to attribute pay rises or feel they should give one. Communication is key in both situations. It is crucial managers address their employees’ concerns and communicate better about why employees make what they make and use benchmark tools such as the Salary Guide to highlight this. For those whose salaries are not entirely in line with market rates, discussing alternatives or an exact timeframe when they will receive a salary increase are necessary steps to keep the staff member motivated.”

“With relatively slow wage growth in Australia, companies can distinguish themselves by regularly reviewing their employees’ salaries and adjusting them to be in line or even higher than industry averages. This approach should be seen as an investment with a solid return as it can have a direct positive impact on an organisation in the long-term due to reduced staff turnover.”

“In a candidate-short market, companies that fail to regularly review their employees’ salaries risk having them gravitate towards more competitive pay packets elsewhere. This can lead to high turnover rates, which negatively impacts organisations through decreased productivity, low team morale, additional costs due to having to restart the hiring process, and even lost revenue.”

“While salary is often the prime motivator when it comes to accepting and remaining in a job, if organisations are not in a position to award higher pay, they need to consider offering non-monetary benefits, such as flexible working hours, the option to work from home and professional development opportunities as they are also strong motivators for jobseekers to accept a role and employees to remain with the organisation,” concluded David Jones.

[1] The 2018 Robert Half Salary Guide contains new formatting for how the starting salaries for each position is presented. The salary ranges are now presented in percentiles (rather than the low-to-high ranges used previously). These percentiles are determined by a candidate’s skillset and experience level, as well as the complexity of their role – the higher the percentile the more complex the role and the greater skillset and experience level required.

By providing a more comprehensive salary overview for all jobs, this approach allows hiring managers to better benchmark starting salaries against a candidate’s experience and qualifications, as well as guides candidates through the necessary steps they can take to earn a higher salary.

It offers a comprehensive overview of the current salary ranges, industry trends and specific job trends for finance and accounting professionals, finance professionals in the financial services sector, technology professionals and administrative professionals. The results and insights of the 2018 Robert Half Salary Guide are based on comprehensive analyses, local job placements, local expertise and independent research of executives and office workers.

About the research
The annual study is developed by Robert Half and was conducted in December 2017 by an independent research company, surveying 1,000 office workers in Australia, with the results segmented by age, gender and geographic location.