Employee mobility on the rise

Employee mobility: 58% of Australian employees say it's likely they are going to look for a new job. Read the full hiring release today.

Despite the current volatility in the global economy, strong trend growth in employment has continued in Australia. The latest unemployment numbers have decreased over the year from 6.2 per cent to 5.8 per cent, and more than 300,000 more jobs have been added since December 2014. 2015 has seen the greatest level of job growth since 20061.

As more opportunities are appearing on the job market, workers are increasingly willing to take on a new professional challenge.

There is also a growing level of sureness regarding their job prospects: 56% state that they have more confidence in finding a new job compared to one year ago.

There are, however, some clear generational differences. Employees belonging to Generation Y (73%) and Generation X (66%) are much more inclined to look for a new job than the Baby Boomer generation (36%). Furthermore, confidence in finding a new job is also significantly higher for Gen Yers (79%) compared to Gen Xers (55%) and Baby Boomers (51%).

David Jones, Senior Managing Director Robert Half Asia Pacific said: "Employees today are more open to accept new professional opportunities and will be more tempted to accept a new challenge from a different employer when they are offered employment conditions that are (more) interesting to them.”

“Staff retention is therefore a high priority for Australian businesses in today’s market. Companies must take the necessary measures to retain their high-performing employees, thereby maintaining the continuity of their teams, avoiding additional costs to the recruitment process, and preventing the loss of valuable business knowledge," according to David Jones.

For what reasons do employees accept another job?

The main reasons why employees accept a job offer not only revolve around remuneration. At the top of the list is a reduced commute time with 63% of Australian office workers saying it would be a crucial factor when accepting a new job. More than half (53%) refer to an improved work-life balance, followed by a higher starting salary (51%) and job content as well as career advancement (50%).

Yet, there are some clear generational differences: Generation Y (67%), for example, attach more importance to career development opportunities compared to Generation X (51%) and the Baby Boomer generation (33%). These last two generational groups are - with respectively 52% and 62% - more concerned about their work-life balance than Generation Y (43%) are.

What are the three most important criteria when accepting a new job offer? 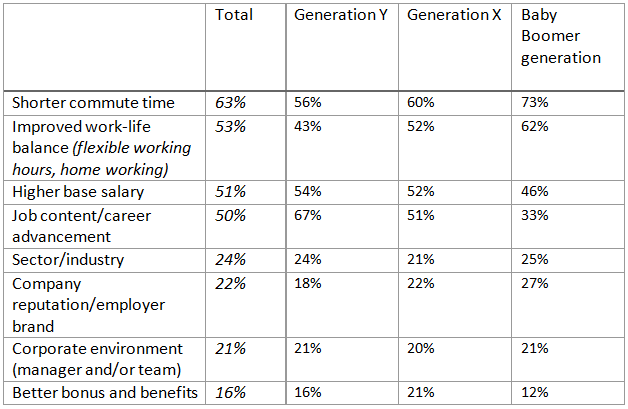 David Jones continued: “In a market where demand for specialised top talent exceeds supply there is an increasing willingness on employers' side to meet the individual needs and expectations of top candidates and employees.”

“There is no standard approach, however, to recruiting and retaining staff. What important is for one employee is not necessarily important for the other one. A successful staff attraction and retention policy therefore keeps the expectations and wishes of the various generations and the individual employee in mind,” David Jones said.

Australia, at the bottom of the global list
Even though the majority (58%) of the Australian employees say it’s likely that they will look for another job in the coming months, Australia is in last place in the global rankings. On average, 72% of the 7,500 surveyed office workers in Belgium, Brazil, France, Germany, Hong Kong, the Netherlands, Singapore, the United Kingdom and Australia say that they are more willing to look for another job compared to one year ago. France (92%) and Brazil (87%) are at the top of the ranking.

Five tips on how not to miss out on top talent

1. Act promptly - Companies that are looking for talented candidates benefit from a recruitment process that runs smoothly. If hiring managers do not act quickly enough, they risk losing the candidate to a competing organisation.

4. Be realistic in your expectations - Naturally, companies want a top candidate who has all the required skills. Still, companies should focus on the skills that are essential for the function (need-to-have). Additional nice-to-have skills can be further developed through additional training.

About the research
The study was initiated by Robert Half and was conducted anonymously in September 2015 by an independent research company. The organisation engaged with a total of 7,500 office workers across Australia, Belgium, Brazil, France, Germany, Hong Kong, the Netherlands, Singapore and the United Kingdom, of which 1,000 office workers were Australian.